The diplomatic, political and aristocratic hub of the late 19th & early 20th century exudes opulence and charm to this day.

Chalepa is located on the North-East outskirts of Chania city where the road from Akrotiri (Cape) comes to an end entering the city. It was and still is an affluent suburb of the city, and back in the 19th century it was considered a diplomatic hub. Opulent mansions with large lush, gardens housed the crème-de-la-crème of Chania’s society and most of the consulates where also located in this aristocratic quartier. Prime Ministers of Greece such as the Ethnarch Eleftherios Venizelos and Konstantinos Mitsotakis lived in Chalepa.

Many of these architectural masterpieces have been abandoned because of the great cost of restoration however some have been saved and transformed to boutique hotels. The consulates of Great Britain, Austria-Hungary, Germany operate as hotels, Villa Blanche (ex-French consulate is currently being restored) will become a luxury boutique and Italian consulate is operating as an elderly home.

For those who enjoy walking, this promenade from the city center to Chalepa area is just right! A 2.3km or 30’ walk from the Venetian Harbor heading east, on the coast line further from Koum Kapi, you will find yourself at the aristocratic and historical neighborhood of Chalepa.

A beautiful walk by the sea will lead to you Eleftheriou Venizelou Street and the first examples of fine late 19th and early 20th century architecture. Apart from Villa Blanche, all of the other Consulates were located on Eleftheriou Venizelou Street. A street taking the name after Prime Minister Eleftherios Venizelos, whose mansion is also located on this street opposite Elena Venizelou square. The mansion is now a museum masterfully restored, showcasing the house in its original state, as well as many of his personal belongings and his original car in the garage.

On the square one will find the Eleftherios Venizelos National Foundation of Research and Studies as well as the church of St John the Baptist. Walking south, up the Dagli Street you will encounter the premises of St Magdalene church in a large garden with trees offering shade to the locals. It is a colorful church and a prime example of Russian architecture built by Prince George in 1901, dedicated to his sister Maria, wife of the Grand Duke of Russia. Walking away from the square heading East you will encounter the grand Evangelistria church. It is the largest in Chania and while its construction began in 1908 in the presence of Alexandros Zaimis and was officially open in 1923, after a long attempt to fund its expensive construction. Next stop to your walkabout is Tabakaria area. 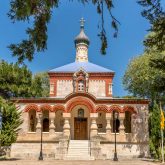 One of the most historical buildings in Chalepa built at the end of the 19th century.

Built in 1858 for an Egyptian merchant, then in the hands of the St Joseph Catholic Order and finally bought by the Technical Institute of Crete.

Built in 1880 by Kyriakos Venizelos, housed the family of his son Eleftherios, who renovated it entirely to his likings in 1927. In 2015, the house becomes a museum by the Greek state and opens its doors to the public.

Taking after the name of the 2nd wife of El. Venizelos, opposite the museum where his statue stands.

A beautiful Russian style church that hosts many religious ceremonies every year. It is very popular among the locals for weddings and christenings.

The religious crown jewel of Chalepa. It took 15 years to collect the adequate funding for this majestic Greek Orthodox church.